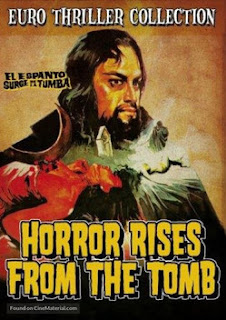 This comes to us from the same collection that held Night of the Death Cult.  I'm beginning to suspect that all of the films on that set are just obscure 70's horror films from Europe that they were able to purchase for cheap or compile for free.  Keeping that in mind, I might just throw this entire thing in the trash.  I haven't decided yet.

Horror Rises from the Tomb starts in the past where a "warlock" and his "witch" lover are going to be killed for their crimes against god.  As punishment, and in keeping with older religious beliefs, their heads will be severed from their bodies and buried in secret locations.  Before this sentence can be carried out the warlock and his lady friend curse the families of their accusers and threaten to return!  Now in present day, a bunch of white people think it would be a good idea to ask a psychic where the warlock's head is buried.  An intense table tipping event happens and they set out the next day to dig up a Legend of Zelda style treasure chest.  Once opened, there is just an illustration of Astaroth and a sickle.  Killing ensues, warlocks come back, and I fell asleep at some point and couldn't be bothered to care.

It's weird to watch this after watching Night of the Death Cult because the two feel very similar in their cinematic structure.  Some previous event setting up the backstory for whatever lame hijinks are now happening, and it's all incredibly boring.

What was really off-putting was the story telling structure of Horror Rises.  If you've ever read Scott McCloud's Understanding Comics there is a brief section in which he outlines how sequential art works best.  In his examples he has a simple scene which is told in three parts: one using too many panels which explain every minute detail, the best paced use of panels and information, and a two panel which omits too much info.  Each still tells the same start and end, but how we get there is dependent on the information given.  Horror Rises... does the last example where we are just to draw our own lines between scenes and story progression.  What I did watch of this film left me confused because of this.

Horror Rises from the Tomb isn't worth the time you would put into it.  Unless you use that time to nap, in which case it works out well.  Otherwise do yourself a favor and pass on this.  Also, if you ever come across a 10 movie set entitled Deadtime Stories then don't buy it.  I got it for something like $5 and I want that money back from 2009.

I give Horror Rises from the Tomb 0 copies of Marvel's The Tomb of Dracula out of 5: