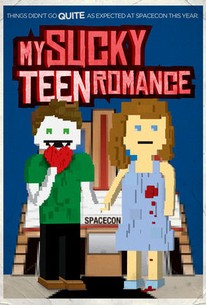 I picked this DVD up from a used store not long after it was released.  That should've been my first warning.  The second warning should've been that I got it for something like $3.  Think of that scene in the first Wayne's World movie where The Shitty Beatles are playing and Wayne asks "are they any good" and we get the reply of "Oh, they suck!" and the joke rounds out with Wayne saying "Then it's not just a clever name." My Sucky Teen Romance...is it any good?

We start in the 1950's where we see an obvious vampire greaser who looks like Edward from Twilight if he was an extra in Grease.  We then flash forward to present day where a comic nerd is talking about how great Spacecon is going to be while his coworker finds him lame.  A fellow nerdy girl has a moment with him, but shortly after she leaves our Edward wannabe comes in to fuck up robbing the store.  We are then introduced to the rest of our crew and they all go to Spacecon... where there are very few people actually dressed for anything space related.  In fact, this "convention" looks like what I picture when I think of that Dashcon debacle.  The cashier from the supermarket was turned into a vampire and he accidentally bites the check-out love connection.  The rest of the film is them trying to prevent themselves from turning into full blown vampires by hunting down Greaseball Lightning.

I just heavy sighed before I started typing here so that's an idea of what's about to come.  This film is equal parts good and bad.  For an independent horror-comedy the actors and cinematography actually pull through pretty well.  On the flip side, the script and set design feels unnatural in a way that makes you think that there is some sort of continuous inside joke that you're just not privy to.  It's so self-deprecating to geek and fandom culture that rather than laughing along with the film My Sucky Teen Romance just does that awkward laugh to itself when none of the jokes really hit.

That said, there are two parts I did like.  One is when our two main female characters go to the "teen" room and it's supposed to be cool and instead they open the door to a room of awkward people and one girl just yells "LOOK! MORE TEENAGERS!"  The other is at the vampire panel (which, if you do watch this DVD, watch the deleted scene from this because its adlib is much better than most of this scene) where the obvious Twilight fangirl asks if vampires were real would a centuries old vampire fall in love with a teenage girl and they could live happily ever after and the main panelist just replies with "That's fucking gross!"

Speaking of this scene, I don't know why I never made this connection before, but almost all vampires are pedophiles (or ephebophiles if you want to get technical) as they are usually dozens if not hundreds of years old.  Just because you look 17 forever does not mean you are 17.  You're 800 and trying to pick up some 16 year old.  That's fucking gross!  See!  Now I said it too!  That makes it true!

Back to My Sucky Teen Romance... it was okay, but I must say that it's not just a clever name.

I give My Sucky Teen Romance 1 lame vampire out of 5: