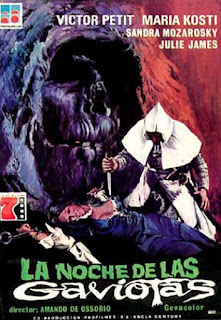 Coming from another horror film 10-pack, but not the same 10-pack, we have Night of the Death Cult!  A film that is actually known as Night of the Seagulls but I'm told was something else.  Not only that, this is apparently an over watched VHS tape rip that is poorly overdubbed!  Yes! Get Into it!  Get into this fucking mess!

Night of the Death Cult is the final part of the Blind Dead series.  I don't know what the hell this series is but if all of these films are similar then they're bat shit crazy.  A cult of Knights Templar have been killing women and feeding the hearts of the victims to a strange frog statue.  In present day a village sacrifices seven women for seven days once a year.  The skeletal ghouls of the Knights Templar come and take the girls to continue their ritual.  A new doctor comes with his wife and the villagers treat them like shit until the secret comes to surface!  Oh, and the spirits of the sacrificed women turn into seagulls.  That's the seagull part.

Once the credits started I only had one reaction... 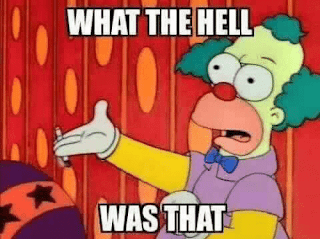 Honestly, this version of the film is terrible quality, but there wasn't much quality here to begin with.  I don't know if I need to watch the other films or if this is a stand-alone.  I still feel like the plot made very little sense.  Why were the Templars skeleton men that still need lady hearts?  Why did the village know of this?  Fire kills the skeletons but they can ride horses without a problem?  Why does that grocery store just have a basket of fruit and paper bags?!  FUCKING SEAGULLS?!

Don't watch this.  It's shit.  Fuck this shit!  FUCK IT SO FUCKING HARD IN ITS SHITTY VHS RIPPED BUTTHOLE!