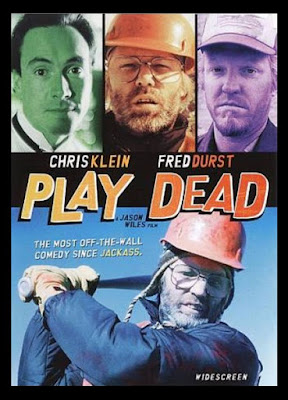 Play Dead came on a DVD as an extra film with Last of the Living (which I also haven't watched).  By association I assumed that Play Dead would be a horror film, but it came across as more of a thriller comedy.  The latter of those descriptors it looses relatively quick.  In truth, this is the an awkward teenager of a movie where it wants to fit in somewhere but it really isn't sure where it does so the whole thing tries to fit into a bunch of different cliques.  I could make a "horror because of Fred Durst" joke, but I'll be up front and say that he does a decent job.

Our main character in Play Dead is Ronnie.  He's an actor best known for his work in a show that wasn't quite a Power Rangers rip off, but not quite as bad as Big Bad Beetle Borgs.  So let's say a VR Troopers knock off.  After his stint as the blue one, his promising career went nowhere.  He has a breakdown after a casting interview and drives until his car dies.  He finds himself in the middle of nowhere when he meets Ledge (Durst) and is given a ride into town.  He then finds himself on the wrong side of the local drug dealer and calls in his old hero team in an effort to save himself and the town.

As I mentioned above, this film doesn't know what it wants to be.  The beginning has a lot of poorly written comedy scenes in it, including that Durst's character is a small town simple creep which they try to turn around to make Ledge an exploited victim of the situation.  It's a poor transition from someone that has a dead DEA agent in their bathtub to unlikely hero/sidekick.  Jake Busey is here as well, looking like the most redneck version of Josh Homme (Queens of the Stone Age) I've ever seen.

As a whole, Play Dead can just be labeled as "competent."  Everything that makes this a movie it does well enough, but it just reaches that bare minimum.  There are definitely better and worse films out there.  If you're looking for something that's horror though, this isn't it.