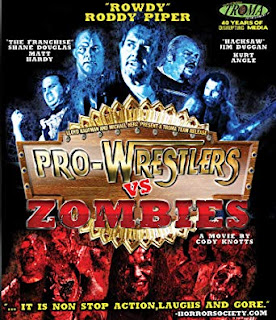 I've had this sitting on my shelf since Christmas when a family member bought it from a list of DVDs I gave them.  Utterly confused on their part, they just seemed happy to get me something that I was excited for.  I knew the gist of this film from Wrestling With Wregret's review but by now I've forgotten everything and it became a good time to revisit it.

Pro Wrestlers Vs. Zombies sums up most of the premise in its title.  In true Shane Douglas form, he's a dick and kills a man in the ring with a tombstone pile driver all because Shane caught his woman having the fakest sex ever with the now murdered wrestler.  The brother of the corpse approaches the promoter and says that he wants a private show at an abandoned West Virginia penitentiary with Shane as the main person.  The promoter also offers up Matt Hardy, Kurt Angle, Rowdy Roddy Piper, Hacksaw Jim Duggan, and Reby Sky for no reason other than he was just handed about $3000.  The building is full of zombies and once inside everyone has to try and fight their way out... all because Shane Douglas is a dick.

Aside from the wrestlers fighting zombies and Shane Douglas being a shit bag, the remaining plot of this film gets muddy.  The living brother eats human hearts to gain power to create and control the zombies but he gets that power from some person or demon.  I'm not sure.  All I know is that if you're getting a bunch of wrestlers together for a film then your demon bad guy needs to be fucking James Mitchell!  That dude is probably Beelzebub for real.  Although, Kevin Sullivan makes an appearance at the beginning so I guess that hits some sort of Satan quota.

Piper isn't quite up to his They Live level, but he stands out the most.  Matt Hardy and his then girlfriend/now wife Reby Sky literally exist just to have awkward teenage "my parents are downstairs" sexual encounters.  Hacksaw is Hacksaw.  I can't talk shit on him because I met him and he was one of the nicest dudes I ever talked to.

Overall this film is a mass of awkward pacing and clearance Halloween City zombie make-up.  Pro Wrestlers vs. Zombies is really only for fans of wrestling and super low budget movie making, but there are some inside jabs such as Shane Douglas saying "Your checks aren't going to bounce like Paul Heymen's..." which you have to know about the business to get.  Also, low fuckin' blow, Shane.

I give Pro Wrestlers Vs. Zombies 1 ECW Extreme Music CD out of 5: