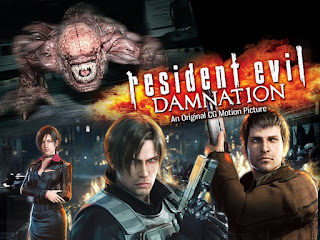 The fact that I love Resident Evil is the worst kept secret on this website.  I reviewed Resident Evil: The Final Chapter when it was out in theatres and talked about Resident Evil 7: Biohazard as soon as I finished the game upon release.  So when it comes to the CG films that they've put out, you better believe I own them, or at least most of them.  I didn't realize that there was a Japanese one that counts as the first one and I haven't picked up the one that came out last year.  The latter isn't in my collection because Sony and Capcom are bad at subtitling these films so you don't know which one you own.  This one has been sitting on my shelf since last Christmas.

Resident Evil: Damnation takes place after Resident Evil 4 (still the best game in the series).  Leon is sent into an area of the former Soviet Union on reports that rebels gained access to B.O.W.s (Bio Organic Weapons).  At the very start he is told to pull out but instead continues on in search of Las Plagas and the people using them.  He ends up working with freedom fighters that have learned to control Lickers with the help of Las Plagas, at the risk of their own lives and sanity.  Ada Wong is here being badass as usual and working with the government in order to gain access to a sample for a secret client.

Okay, I'm getting my biggest complaint out of the way first and it isn't even with this film, it's with the disc itself.  I had to skip through a commercial for Sony and five previews of I don't even care what before the blu-ray would even let me access the menu.  That's bullshit!  I gave you money and all you're doing is wasting your time and mine!  Cocknose.

I have no complaints with Resident Evil: Damnation.  They have Leon's Resident Evil 6 voice actor (who pretty much sounds like the original voice actor from the prior CG film and RE4).  They do small nods to things like having Leon yell "Come On" exactly as he does in the games.  It also does good fan service without going overboard.

I think that since this was a Las Plagas focused film they were smart to have this change up with the Lickers and a greater focus on Ada's doings.  The early games were never really about trying to kill everything and they kept that focus in check.

Speaking of Ada, she has the hypest fight scene in the film!  Sure, it's essentially an animated film but the entire time I was enraptured by it.  It's John Wick levels of rad hand-to-hand combat.  Also, bringing in multiple Mr. X for Leon's final fight was a definite pop for me.

Overall, I really liked RE: Damnation.  Aside from a bit of slowdown it was a solid film.

I give Resident Evil: Damnation 4 Umbrella logos out of 5: