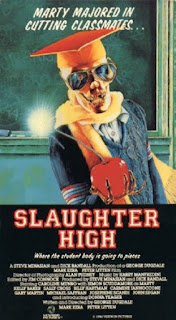 I can't tell how fucking disappointed I am that there isn't a single skeleton in this entire movie!  I used to see this on the shelves at video rental stores as a six-year-old and it would freak me out (I had a big fear of skeletons at the time).  Not one fucking bone man... unless you could the dude that dies by electrocution while having sex.  I don't, he just kind of fell off the woman like he suddenly remembered there was cooler stuff on the floor.

Slaughter High was weird.  Some "hot" girl has convinced the school nerd, Marty, that she is going to have sex with him in the girls locker room.  In truth, it's a trick in which other maybe popular kids set up full AV equipment to film Marty naked.  When everyone gets caught in the act by the coach, all involved are punished except for our nerd.  He's staying after school to work on his chemistry project.  When both he and his project get sabotaged by our group of jags, Marty ends up terribly burned while no one attempts to put the fire out or save him.  Fast forward to five years after graduation and the group all get invites to a reunion at their soon-to-be demolished school.  Death ensues... or does it?!

I know what I watched, but what the hell did I watch?  Let's start with the music.  There is one song you're going to hear a million times which goes between hitting your dick on a synth and shitty butt-rock every twenty seconds.  Then there's a second song which appears which sounds like a bloopy cover of The Tide is High by Blondie but also changes into something else entirely different after a short time.  It's like they wrote four songs but realized they were all too short so they combined them into two songs.

There are also strange and confusing plot and scenery choices.  When everyone returns to the school for this "reunion" they all look the same but just in nicer clothes.  When Marty is in the girls shower taking off his clothes there is graffiti on the wall that says "Marty Rantzen Sucks" which he then changes to "Marty Rantzen Fucks."  First, why is that already written in the shower?  Second, the phrase "Marty Rantzen Fucks" breaks my goddamn brain.  Finally, one of the characters says "April Fools stops at noon, so we just have to make it to midnight."  Okay, first, you fucked up that line as those are two totally different times.  Next, you're ascribing a point of logic to this film which isn't true!  Midnight comes and that doesn't stop Marty!  He's not Cinderella!


Speaking of Marty, I'm going to stick up for him here for a second.  He looks like a younger Rivers Cuomo, his body is actually pretty decent, and when you see his dick in the beginning he's got nothing to be shy about.  Yeah, he's the dorky guy, but some of us like the dorky guys.  Also, it now says on the wall that he "fucks."  "Who's Marty Rantzen?" "I don't know but I heard that he fucks!"


I give Slaughter High 1 doot doot skeleton out of 5: