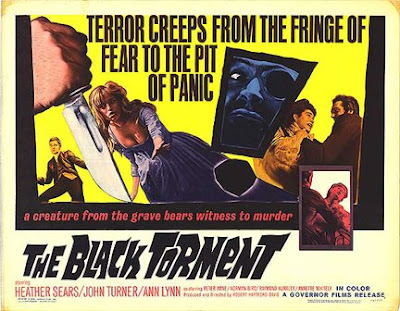 I don't know what was wrong with me in the past, but I definitely have made some questionable purchases in my life.  Case in point, today's film The Black Torment.  I think I acquired this under the assumption it was something else entirely and the $1 price tag from the used store ended up sealing the deal.  In truth, I feel as though I made a pact with the shitty movie devil.

The Black Torment is sent in Powdered Wig Era with Richard returning home from London with his new wife.  Upon his return a ton of people are dicks to him and there are strange rumors that he never left.  When he begins to see the ghost of his deceased first wife running the grounds and riding his horse, Richard finds himself torn between madness and the truth before all is revealed!

One of my earliest notes for this film is that this is "period music and trumpets the movie."  There are some really long establishing shorts early on and they probably only exist to pad this movie to pass the hour mark.  The story isn't that bad, but in the 54 years since The Black Torment's release, the plot device and resolution is the Occam's razor standard for such a film.

This movie did lead to me learning something interesting though.  Richard's father had a stoke and would communicate through sign language.  Being curious as to if this was period appropriate I found that the first published book of sign language was released in 1620.  That's your interesting facts caused by shitty movies moment!

Unless you have a weird boner for slow period piece horror films, avoid The Black Torment.  The only thing that could've possibly saved this would've been if Richard was played by Vincent Price.  It wasn't and as such this film suffered.

I give The Black Torment 1/2 a White Zombie Black Sunshine single out of 5: