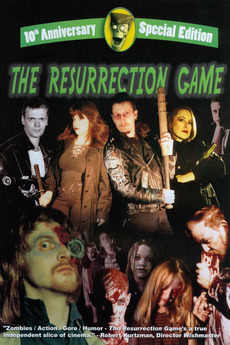 Welcome back for the start of our 10th Cut!  This time I decided to change things up and go to the 30DoP vaults (a.k.a. my DVD shelves) and pull out all of the random horror films and collections that I've picked up over the years but have never watched.  When it comes to horror I have the Robocop mentality of seeing something and saying "I'd buy that for a dollar!"  So I have a lot of crap.  A lot.  Lots...

On my last trip home I was able to pick today's film up from a used media store.  Filmed mostly in and around Pittsburgh, PA, The Resurrection Game was put out by Happy Cloud Pictures.  They're from McMurray, PA.  You've probably never heard of it.  Hell, I barely even known of it.

When the PI is hired by a horror author to find a cure for the zombie virus (because real zombies existing hurts his book sales) everyone ends up teaming up after there are suddenly zombies with cyborg implants and possess greater strength and speed.  I think it's because the implants look like they're made from Warhammer 40K terrain pieces.  This all leads to a showdown with what I think is a corporation but the building is mostly built out of fog machines, darkness, and ominous lighting.


The Resurrection Game is a capital fucking B-movie.  Our story has a lot of loosely tied elements to it which I assume were fixed in the novelization the director released in 2002.  We get solid acting from our main characters but most of the secondary line is a bit rough to watch.  It's poorly paced as well which isn't helped by the occasional TV screen cut-ins that always bare the production company's logo.  There are also some issues with digital artifacting with the transfer of this film which take away from it.  Unless their goal was to look like a Sega CD game.

I'm assuming this was the first film put out by Happy Cloud Pictures.  Their site doesn't help with the chronology of their releases and IMDB wants me to pay for Pro to view the company page, so it's a fail on all ends.  That said, I'm definitely going to hold on to this because it's Pittsburgh.  I was born there.  A part of that city will always be with me... mainly because I'm pretty sure there's a piece of glass or metal eternally lodged in me from a punk show.

I give The Resurrection Game 1.5 Night of the Living Dead remasters out of 5: