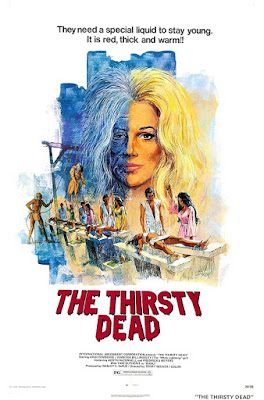 How many of these cheap horror movie collections do I own?  The answer is a lot apparently.  Coming to us from a 13 film set entitled The Living Dead we get The Thirsty Dead!  I chose this film specifically because of the description on the back of the case which is as follows:

That was enough to hook me but The Thirsty Dead has so much more!  Each lady is kidnapped from the city by men in red cultist robes with giant hoods.  They're taken to a boat, unbound, and paddled down to the cave.  The erotic dancer just assumes they're going to become sex slaves and she is 100% down for that, saying something like "you can make money and never leave your bedroom."  We are then shown the cultists that are dressed somewhere between original Star Trek humanoid aliens and Flash Gordon extras.  The blond female with crazy Dolly Parton hair resembles the old queen of this group and, after consulting the head in a box, they try to get her to join the cult.  Will she drink the blood potion and live forever or will she deny the prophecy and complain about just wanting to be with her "friends" the whole time?

There was a lot going on in this film.  The beauty queens really don't do a whole lot in this film except for complain and one eventually has a snake on her foot.  The erotic dancer exists to be hyper sexual in her comments and actions, also to have the most hilarious death which I assume was some weird 70's way of saying that having loose morals leads you to dying in a pit of bones and rats.  The cult is insane and as the film goes on more and more crazy shit get s revealed.  Initially it's just a guy in a blue tunic, then there are tons of local women, then there's a head in a box, then there's a telescope and a glory hole?  Yeah, it gets weird and stays weird.

It probably had a decent budget as well, or at least access to old sci-fi sets to have all the matching costumes and the strange cavern lair.  Unfortunately they didn't put any of that toward the special effects make-up as the appliances are poorly constructed and blended into the actresses.  While I think of it too, for a random horror movie in the 70's I don't recall seeing any bare breasts at any point in this film.  Even when the dancer was doing her routine in a cage at the beginning she was still wearing what equates to a two-piece bathing suit.  I don't know why I'm surprised by this but it just seems like an odd staple with 70's and early 80's schlock horror to throw in some breasts.  Maybe this film thought it couldn't contend with Hammer Films and kept it covered.

All in all, The Thirsty Dead wasn't bad.  It wasn't amazing, but it was a "watch this with your friends and laugh at it" kind of fun.  My husband joined me for this watching and it definitely made the film better.

I give The Thirsty Dead 2.5 stock photos of someone drinking water out of 5: