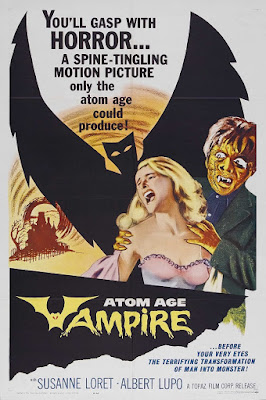 Atom Age Vampire comes to us from one of the better box set of films.  Once again it's meant to be "living dead" films but this isn't really one of those cases.  Although, despite watching this film I'm still foggy on the logistics and I'm pretty sure there isn't an actual vampire in it.  Full disclosure: this was boring enough that anything and everything distracted me while watching it.

We open with the fastest plot development I have ever experienced in all my hears of cinema watching.  Jeanette is a singer that is so distraught by her boyfriend leaving her that she refuses to do an encore, quits her job, and instantly wrecks her car over a cliff (by accident) and suffers burns to a small section of her face despite that son bitch being lit the fuck up!  Traumatized by life and her easily covered scars, she is sought out by Dr. Levin who tells her that she can be cured with his new Derma 28.  When the supply runs out Dr. Levin realizes he has to kill people to get more crucial ingredients so he injects himself with some stuff that turns him into a monster.  His logic is that he won't feel remorse for his actions while in that form, which is really some bullshit drunk driver logic.

Despite the lightning quickness of establishing Jeanette and her story, the rest of this was a slog.  I'm glad I watched it but it's more for the right to say that I watched it as opposed to actual enjoyment.  I'm sure there is a whole intentional meaning behind the use of radiation and the fact that Dr. Levin studied the effects after the bombing of Hiroshima but I can't be bothered to find it.  Let's say that the actions were monstrous and, as such, his grotesque form is meant to represent the true creature of destruction, the white American male.  There.  I did it.  Big dick Nobel Prize winning shit there!

I give Atom Age Vampire 1 Nobel Prize out of 5: