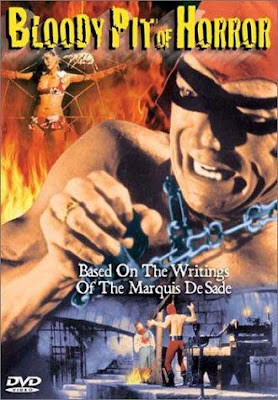 My version of this film came from another box set so I didn't get this cover art.  If I would've seen that this was "based on the writings of the Marquis De Sade" then I would've made a hard pass.  Not because I have anything against the Marquis De Sade but because I have a thing against anything that attempts to be "based" on his writings.  Except for Quills.  Quills is a good film.

Bloody Pit of Horror opens with the Crimson Executioner being taken to his own torture room to be killed in an iron maiden.  He apparently broke from his general executioner duties and used his own moral code to target individuals that he felt did not fit appropriately into society.  In present day, a photographer, producer, and a group of models all show up to a castle in order to do a photo shoot.  Apparently 60's Italians just showed up to shit unannounced and unplanned to do things because the castle is locked and one of the models scales the wall to drop down and unlock the door.  They stumble across the actual master of the castle and he says that they can stay but will leave tomorrow.  Accepting this generous offer the 60's Italians proceed to sneak around to try and find the wind cellar to raid it and in turn find the Crimson Executioner's set-up.  They decide to shoot photos on torture devices until one of them is accidentally killed by spikes.  This sets up a "return" of the Executioner and the eventual half-hour of softcore BDSM he inflicts of the females in the group with lots of breasts to gaze upon.

Bloody Pit of Horror exists as a lead-up until to the reveal and torture scenes.  This isn't so much a horror film as it is something you would catch at like 2AM on some cable channel as a young teen and you would think that you just struck stroke gold.  My copy was overdubbed but it doesn't help when there are some cinematically confusing reaction shots where the person doesn't show any emotion.  The characters in this film did nothing to bring about any concern or emotional connection to them.  Everyone was pretty much just an asshole with no respect for anyone or anything except themselves so I couldn't be bothered with them.

I chose this film because the title Bloody Pit of Horror sounds like it would be an early Misfits b-side but instead it ended up being the equivalent of some kids getting into their mom's make-up and fucking up while playing Last Caress in their parent's garage.  I saw it.  Now I will never see it again.

I give Bloody Pit of Horror 0.5 copies of Quills out of 5