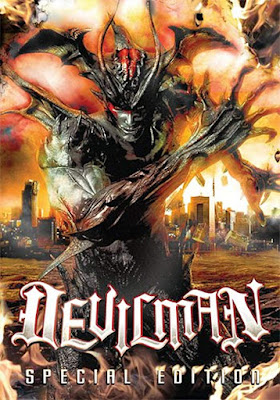 Coming from the same table at the same anime convention (although a year earlier) is 2004's entry to the Devilman series.  Created by Go Nagai back in the early 70's, Devilman has had a manga, multiple films, and anime series with the most recent being on Netflix.  Though much tamer than its counterparts, let's jump into today's review.

Devilman focuses on Akira and Ryo.  Ryo is essentially a violent delinquent that describes himself as "pure evil."  Akira is Ryo's only friend, despite being the opposite of Ryo in every way.  Akira is the only person that can calm Ryo on his angsty rampages.  One day Ryo has Akira go with him to his father's lab where an experiment with demons and demon energy has lost control and released the dark entities to our plane of existence.  Akira is hit by a particularly nasty demon but is able to retain his humanity, while Ryo becomes angelic.  The world descends into chaos as the released demons possess bodies and feed upon humanity and only Akira can stop them while also trying to save the world from itself.  Ryo has other ideas in mind.

I've said this about other films in the past, but this is truly the center point between amazing and crap.  Despite the long time it didn't drag too much but at the same time I wish the story pacing were a bit stronger.  The CG could be a bit questionable but it works well for the fight scenes where there's a lot of action and not a lot of time to focus on the details.  I also wish the Ryo reveal was done a bit more tactfully.  We're presented with info in the second act that should really only exist for the final reveal.  Otherwise, it is a solid film.  It's just not enough for me to get behind.  I would recommend Devilman with an apathetic "you might like it."