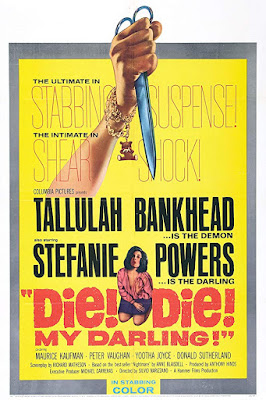 This is turning into the "Week of the Hammer" because we've got another one here from my cheap Hammer Films Collection.  This film was what sold me on buying the set because with the Misfits song being so good, obviously the movie has to be.  Right?  Danzig wouldn't lie to me, would he?  Sure, he'd have me kicked out of a concert if I tried to take a picture of his gut but... young baby Danzy?

Die! Die! My Darling! opens on Patricia with her current fiancé.  She tells him that the mother of her prior, now deceased, fiancé has sent Patricia a letter and she would like to visit the mother.  The fiancé continues to London and Patricia travels to Mrs. Trefoile's home.  Upon her initial arrive Mrs. Trefoile just seems to be a still mourning mother and overly pious woman.  It's when Mrs. Trefoile's zealous nature bubbles to the surface that Patricia attempts to leave but finds herself held captive by a mad woman.  Can she escape befor she is murdered in the name of her dead ex-fiancé?

Okay, I described that much better than this film is.  Don't misunderstand me, Tallulah Bankhead fucking kills it as Mrs. Trefoile, but all of the other characters I don't really care about.  The husband and wife duo that had been Mrs. Trefoile's helpers and accomplices are just grifters and Donald Sutherland's simple Joseph serves no purpose aside from being muscle.

The film itself is a bit of a crawl.  A majority of it consists of Patricia being locked in a room and attempting to escape or Mrs. Trefoile descending further into madness.  I do like that the breaking point for her is having a stash of all her sinful items and then doing the crazy wide lipstick ring around her mouth.  Other than that, Danzig has bad taste in movies.  Actually, Danzig has taste in very slow moving films because I've watched Where Eagles Dare and it was a crawl too.  I have a copy of THX 1138 which I haven't watched yet, but if it's slow then Danzig is getting an angry tweet!