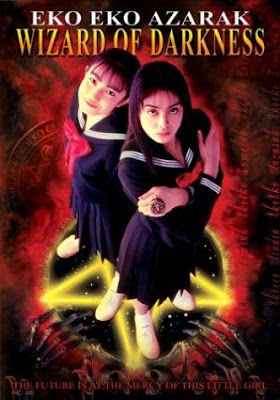 Ever since I bought this film, I continually forget that I own it.  I wasn't even looking for it when I was searching for a film to watch, it just happened to be in the same binder as tomorrow's film and I found it first.  So what does that say about Eko Eko Azarak: Wizard of Darkness, aside from that title is too long?

Eko Eko Azarak: Wizard of Darkness (or Eko Eko as I'm going to call it from now on) opens with a satanic cult using magic to kill teenagers.  Their apparent goal is to take the lives of 13 innocent teens in order to bring Lucifer to Earth to do whatever.  This film is really vague on what the end goal is here so we get: Step 1: Kill Teens, Step 2: Summon Lucifer, Step 3: ????, Step 4: Profit!  At the end of their opening ritual they get a warning about a strong witch coming that they should not make an enemy of.  Enter Misa, said teenage witch that ends up trapped in the school with 13 other students and two perverted teachers.  Her goal is to find the head person behind the killings and prevent the rise of Lucifer as this is apparently all she does in each school she goes to.

Eko Eko had this weird feeling to it, like it never sat quite right with me.  It looks like it was just a made-for-tv-movie and its short running time (at least compared to most J-horror films) only bolsters that sentiment.  The plot is relatively straight forward and some of the set-up and magick effects look okay but you can tell that this was most likely made for a PG-13 audience.  This isn't to say that films under an R rating are bad, just that in this case it all feels a bit immature.

Eko Eko was based off of a manga from the 70's and apparently spawned six fucking sequels and a short television series.  I don't know how I feel about that info.  I would like to go back and read the manga for a comparison just to see if they toned things down or if this was always as tame as I perceive it.  You know, because I perceive the magickal murder of teenagers in order to invoke the rising of Lucifer to be a mundane task.

I give Eko Eko Azarak: Wizard of Darkness 2 I-no from Guilty Gear out of 5: