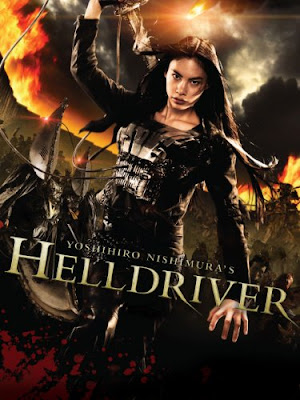 If you haven't noticed by now, this week I'm going through my J-Horror collection and reviewing those things that I bought mainly because they looked cool.  Surprisingly, I only just realized that a majority of these films that I own have something to do with Tokyo Shock (The Asiatic cinema/television focus of the larger company, Media Blasters).  It makes sense though since most of my favorites have high powered blood sprays, lots of action, and insane creature design.  So with that fresh in your brain, let's jump into Helldriver!

Kika's home life isn't ideal. She comes home one day to find her mother and uncle eating her still living father.  During her escape attempt a meteor crashes through the mother's chest but her mom pulls Kika's heart out to replace her now missing one.  At the same time, the meteor was an alien which takes over the mother and encases her in some sort of amber-like shield.  Kika is thrown to the side but not before she gets the same shielding.  The mother than shoots space spores into the air which turn those that breath it in into zombies with strange fungal antenna on their forehead (like ophiocordyceps unilateralis in ants).  Kika is rescued and turned into a cyborg (although they say android here) with a metal chest plate and a chainsaw katana.  She and a small group of sudden friends attempt to take out this zombie queen and save the world.

All the things I love with these Japanese hyper-gore films are present here.  There's a lot of blood, intense action scenes, absurd and nonsensical things that only work for this movie (ie. a car made out of zombie body parts), and the overall feeling of not taking itself too seriously where it would ruin the film.  If I had any real complaint with Helldriver then it would be my usual gripe about pacing.  I was about 45 minutes into it before the title card appeared which made me feel like the whole first half of the film was meant to be an intro to the latter half, and in a way it really was.  We have so much time spent establishing our characters and the world that, when we get to the heart of the matter, doesn't really need to exist.  It's like playing an RPG and you have to grind for a few hours before you're even able to leave the first section and get to the actual adventure.

Helldriver is really a niche film.  This isn't something I could just drop on a friend and tell them to check it out without advanced knowledge of their cinema tastes.  In this case, it would have to taste like blood... a fire hose of blood all yelling at you in Japanese.

I give Helldriver 2 zombie ants out of 5: