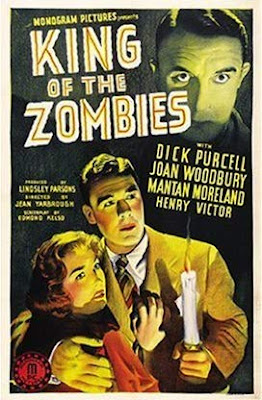 When I brought up this posting to write my review it only had a single note and it said "racist."  I'm letting you know that from the start because this film had a black character that was a step above the minstrel show "why yes sir I sees it" meant to be it's comic relief.  It's fucking 1941!  Ella Fitzgerald had recorded over 150 songs by this point.  Louis Armstrong was an established trumpet player and vocalist.  Nat King Cole released "Sweet Lorraine" the year before and your'e still bringing this weak shit like you've never talked to a black person before in Hollywood?!  Suck my dick!

King of the Zombies takes place on an island where, after becoming lost in the weather, James, Bill, and their friend/maybe servant Jeff end up crashing their plane on.  They find themselves being lead to the mansion of Dr. Sangre and he tells our group that they are welcome to stay and he has no knowledge of the radio signal that would've had them find the island.  Jeff is taken to the kitchen where the "servants" are working and he is told about the zombies that roam the island.  When he encounters them he runs up to tell Bill and James but it's all written off until his second encounter.  At this point Jeff is given a sleeping set-up in Bill and James' room but wakes to find the ghostly movements of Dr. Sangre's wife as she almost strangles one of the men and then vanishes through a secret passage in the wall.  The group then try to find out what's going on all while looking for a way off the island.  This racist fucking island.

Honestly, Jeff's character doesn't even need to exist in this film.  If you took him out then King of the Zombies couldn't function just the same and just as shitty as it already is.  This is the great-grandfather of the B-movie.  It's the one that you look at now and it has been put in one of those crooked nursing homes where the family only visits it on something like Christmas or Thanksgiving and the family preps the children ahead of going in with "remember he's from a different time so some of the things he might say or do aren't appropriate."  Then the kids are horrified by the grotesque racist skeleton-zombie of a film that smells like pee and uses the n-word to describe the orderly.  King of the Zombies needs to die old and lonely with nothing but the slow beeping of the heart monitor lulling it to the grave!

I give King of Zombies 0 tiny maps of the Caribbean out of 5: