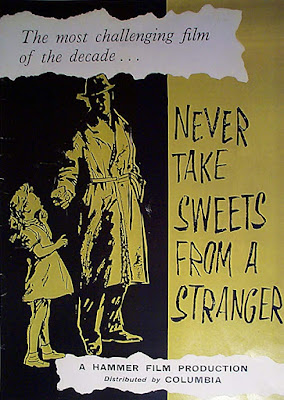 My very first note for this film was "I made a mistake."  Never Take Sweets from a Stranger is part of a $10 Hammer Films collection I picked up from Wal-Mart not long ago.  They have a better one with better films for double the price but I wanted to have  the bottom shelf stuff.  This is certainly the bottom as I assumed I was going to get the usual Hammer lesbian vampires or whatever.  Instead I saw into the eyes of the devil and he winked at me.

Never Take Sweets from a Stranger opens with an old creeper using binoculars to watch two younger girls play.  When one of the girls looses her "sweets money" the other says that she knows where they can get some candy and run towards the old man's house.  Upon returning home for the evening one of the girls relays her day to her parents, not even flinching at the part where she and her friend danced naked while the old man watched.  The family is taken aback and the mother gets the whole story.  When she comes back both her husband and her mother (or mother-in-law, I couldn't tell) downplay the incident and I was losing my mind.  Eventually we get a court case where the defending lawyer rips into the small girl like an absolute scum bag.  The man is found innocent and goes free, only to later find the girls playing in the woods, stalks them, and ends up killing one of them.

I hated this movie.  I hated every fucking second of it.  Not because it was a bad film.  As far as random films from 1960 go this was more than competent.  I hated this because it showed just how horrible human beings can be.  A lot of the town had stories of that old man doing inappropriate things, the grandmother had a story of a man exposing himself to her every day as a child and she just wrote it off like that was normal.  The police, holy fuck the police in this film, pull the "You know he and his family built this town so you should change your mind..." thing and were just evil.  Then the old man's son that was just throwing around his power and influence to protect his nasty ass father.  Acting as if letting the girl's dad keep his job as principal to show that there were "no hard feelings" is anywhere near acceptable.  I've never wanted someone punched in the face as much as I wanted that guy.  I screamed it at the end of the movie but apparently no one heard me through the TV and like 58 years in the past.

A lot of the time horror films will pull the "we were the real evil all along!!!" trope but this is just "humanity is evil" from start to finish.  Don't watch this.  It's uncomfortable and somewhat depressing.   The very end of my notes say "I hate the world now," which is how you leave Never Take Sweets from a Stranger.

I give Never Take Sweets from a Stranger 0 Stranger Danger images out of 5: