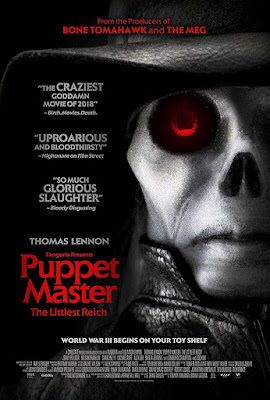 This one probably qualifies for the shortest amount of time sitting on the shelf before it was watched because my husband and I actually purchased Puppet Master: The Littlest Reich to watch the same night.  We already have two different Puppet Master collections in our film library so we needed the newest to round out the series.

Puppet Master: The Littlest Reich exists to retcon every other film in the dodecalogy.  So forget everything up until this point except for Blade, Pinhead, Tunneler, and Torch.  Andre Toulon is living in Oregon after escaping from Nazi Germany as a war criminal.  Now much older, he spent his life in the U.S. making puppets and toys to send out to buyers across the united states.  When a grisly murder leads to his mansion he is gunned down by the police and that seems to be the end of he and his puppets.  Now, 30 years after that event, a convention and auction on Toulon's life, death, and his works is set to commence.  Recently divorced Edgar (Thomas Lennon: The State/Viva Variety/Reno 911) moves back in with his parents only to find a Blade puppet in his deceased brother's things.  Edgar decides to attend the convention with other ghouls and collectors that all seem to have works of Toulon as well.  Grisly bodies start to turn up in the hotel and Toulon's puppets are vanishing from rooms, all leading to a massacre in the parking lot when the con-goers attempt to escape.  Those left alive attempt to stop the littlest reich while solving the mystery.

I'm torn when it comes to this Puppet Master film.  The fact that Andre Toulon has gone from anti-Nazi hero to literally being a weapon for the Third Reich is a bit hard to swallow.  Using iconic puppets such as Blade and Pinhead now has them lose some of their meaning as the former was fashioned after the Nazi that murdered Toulon's wife and the latter was based on a truck driver that smuggled Jewish people out of Germany before being caught.  We also lost Jester and Six-Shooter and had them replaced with less interesting puppets.  The addition of things like Autogyro, Junior Fuhrer, and the horribly anti-semitic stereotype of Money Lender were either annoying or left a bad taste in my mouth.

On the flip side though, as much of a fan as I am of Thomas Lennon's comedy work, I really liked him in something a bit less comical.  Sure, a film with murderous puppets has a humorous side, but I felt a weird connection with Edgar as a character due in part to Lennon's acting.  The writing has high and low moments but some of the best are when it nails the natural dialog and ribbing between Edgar, his boss/friend Markowitz, and girlfriend Ashley.  As a treat as well we are given Barbara Crampton as Officer Carol, the older version of the woman that gunned down Toulon all those years ago.

This movie is far from perfect and it also ends with a giant "To Be Continued" on the screen so if you were thinking of jumping into the Puppet Master series with this reboot then my suggestion would be to wait until you've seen at least the first four original films.  Although I'm going to warn you, they're done by Full Moon so get ready for a bunch of reused footage from the earlier ones you watch as you go along.  Even as a new start, this film is meant as a fan service.  Whether you're a fan and you hate this or your a fan and you're down with the new angle, it's meant for you to watch it.

As of right now there are no plans that I saw for a sequel to come out.  This one was done by Cinestate instead of Full Moon (although Charles Band was a producer) so who knows if they'll pony up with the other investors for it.  Mr. Band has said that Full Moon will continue making sequels to the original 12 with as much continuity to that universe as may still exist so this can be a stand-alone if you want it to be.

I give Puppet Master: The Littlest Reich 3.5 copies of Master of Puppets out of 5: