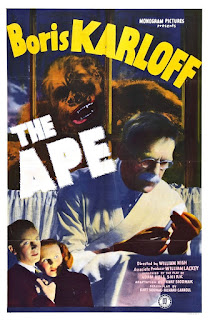 I'm pretty sure my friends' prior band wrote a song about this film.  It's called Ape Man and you can listen to it here.  Go bug Katie over on Werewolf Ambulance about it because she might know more about it *wink*.

The Ape stars Boris Karloff as Dr. Adrian which IMDB describes as a "kindly mad scientist."  In truth he is almost a precursor to stem cell research but rather than using cells he focuses on cerebrospinal fluid.  He thinks he has the right concoction to cure Frances' partial paralysis through a series of injections.  His greatest issue is a town full of people that all have this concept of "I sure don't understand it, so I don't like it" sense of ignorance and a stick up their ass toward Dr. Adrian's history.  While being the town doctor he did have a patient die under his care so everyone tries to avoid him and thinks of him as a kook.  The worst of it being the neighborhood shit kids that smash his windows with rocks and then say that he attacked them for no reason.  As a whole, I know he probably took an oath to do no harm, but he should just let this town of die of the flu or something.  That happened back in the 40's, right?  Also there's a killer ape that escaped from a circus fire.  Despite being the name of this movie, it really serves as nothing else but some subterfuge and, later, disappointment.

This movie is rated "approved" which lead me down a huge rabbit hole of learning about the early foundations of the MPAA, the Hays Code, and what is essentially a way of keeping down early women's liberation, especially in Hollywood.  I also learned that the Supreme Court ruled that films were not protected by the First Amendment and that's part of why the MPAA came to be and still exists as the shit show it is today.

As for the content, I liked The Ape.  It's a quick watch at just over an hour and despite being annoyed by the very ending of it I can't really find any faults.  Sure, the townies and kids were a pile of ignorant shit bags but I can honestly say that those "values" and views of "I don't get it, so I hate it" are still very prevalent in small town U.S.A. today.  Don't get me wrong, if my neighbor were to say he had a lab set-up where he was experimenting with cerebrospinal fluid then I would assume he was just making meth and call the cops but that's more self-preservation as opposed to avoiding the only doctor in town if I broke a bone because he's a bit weird.  I also live in a city but it's the deep South, so... kind of the same.  At least in some parts.

I give The Ape 3 oddly fitting diagrams out of 5: