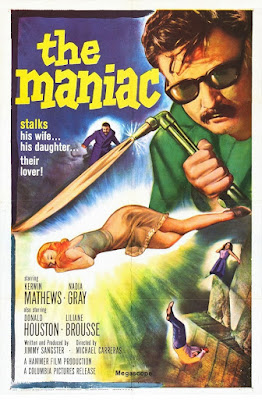 I am turning this into the "Week of Hammer," fuck it!  Sticking with our Hammer Films set chock full of rapidly declining quality movies comes The Maniac!  A film with more heel turns than the WWE Network... and I don't mean just because they'll reinstate Hogan to the hall of fame but still act as if Benoit never existed!

The Maniac, like most Hammer films on this set, starts with a creeper in the bushes.  When the local high school kids arrive home he pulls up to one of the girls and offers her a ride.  He sexually assaults her but is caught by a local man and school boy.  The creeper is knocked out with a wrench and brought back to the man's garage where he is tortured to death with an acetylene torch.  Flash forward to present day where a smooth America leaves his rich girlfriend and ends up in a small French village.  At first he has his eyes set on the young waitress but later moves from her to her mother in a "I'll fuck anything that moves" power play.  The woman's husband is in prison for the torture and murder of the creeper.  She claims that her husband will let the two of them be together if the American and her help the husband escape prison.  They do, bodies turn up, then the American finds himself on the wrong end of the torch.

This movie is just treachery everywhere.  The American betrays the daughter for the mother but then betrays the mother because she was trying to betray him by not actually helping her husband escape but another man that murdered the husband upon escaping and the two of them were going to betray the daughter as well in hopes of... I don't know.  I guess elope?  Have crazy mustache babies?

I'm really beginning to regret not shelling out the extra $10 for the better Hammer Films set.  The Maniac was just as poorly paced and boring as the last two films.  The acting was decent, aside from the couple's dance where the two couldn't look more bored with each other despite one of the characters saying "look how happy she is!"  Whatever, fucking next.  I'm over this.

I give The Maniac 0 butane torches out of 5: