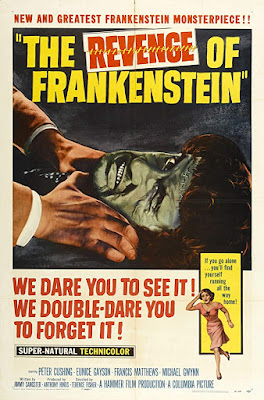 You were the chosen one!  Bring balance to the force, not leave it in darkness!  Fucking Revenge of Frankenstein!  More like Rankenstein because this movie fucking stinks!

The Revenge of Frankenstein is the last of our "Week of Hammer" and starts at the execution of Baron Frankenstein which is apparently at 9000 o'clock according to the church bells ringing.  Instead of losing his head he escapes and goes elsewhere in order to act as a real doctor all while continuing his experiments.  He has a new body all set up in order to do a live brain transplant and it's a success, but his patient doesn't want to be thrust into the public eye of science and the world.  He escapes and causes havoc only to begin to have his new body develop the same physical handicaps he faced with his prior vessel.  Stuff happens!

This started out okay but when there were a set of eyeballs on a stick that moved as an autonomous unit I was starting to question the quality of this film.  Don't get me wrong, there was some serious money thrown into the set designs and this was in color as opposed to most of the other Hammer films we covered this week, but in the end it was all for naught.  Not even Peter Cushing could keep me awake as this film descended from entertainment to a background lullaby as I began to doze on the couch.

We did get another actual Frankenstein Monster, but it came too late for me to care about anything.  Also, there's a fight in the lab early on which leads to tons of beakers full of shit breaking and I guess we have to assume they were all experiments on colored water as nothing bad happened.  No fires, no poison gas, just looks like someone pissed on the floor.

I give The Revenge of Frankenstein 1 Grand Moff Tarkin out of 5 only because of Peter Cushing: