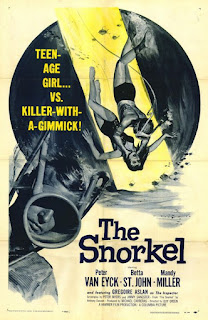 Could there be a dumber name for a movie?  The Snorkel.  Fuck you!  You can snorkel this dick!  I'm not even sure what that means but that's how frustrated I am with yet another film coming to us from the cheap as fuck Hammer Films set I got at a Wal-Mart.  You know, the land of bottomless $5 DVD bins and overpriced animated films.  DROP THE FUCKING PRICE ON HOW TO TRAIN YOUR DRAGON 1 & 2 ALREADY YOU BASTARDS!

Unlike our other Hammer Films, The Snorkel doesn't start with a creeper in the bushes but the creeper is already in the house!  A man has drugged his wife to make her pass out and then tapes up the entire room (doors, windows, etc) in order to blow out the gas lamps and have her die as an apparent suicide.  Why he didn't just drug her and make it seem like that was the suicide is beyond me.  He has hooked up a mask and snorkel to outside pipes and hides in the floor to complete his elaborate faked suicide plot.  When she is found everyone assumes she did kill herself.  Everyone except for her teenage daughter who is apparently Nancy fucking Drew because she puts everything together pretty quick and then it's the step-daughter vs. the murderer for who will come out on top.

While a much dumber premise than anything I've watched recently, I was invested for no reason other than I wanted to see how the hell the girl put everything together.  She never figures out the hiding in the floor but it is given away to her at the end.  Speaking of which, always have a fucking back door, or at least an axe or something in case you get stuck.  You know, since you're hiding in floors all the time.

All in all, The Snorkel is a big bag of meh.  Once again, solid acting performance from all involved, and this film has my favorite opening credit now which is "John Holmes dog "Flush" as "Toto" because that dog deserves a fucking credit!

I give The Snorkel 1 hunky scuba diver out of 5: