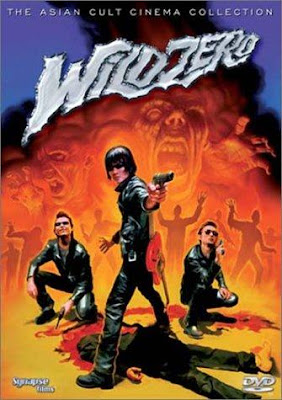 Holy shit, Wild fucking Zero!  I picked this up a few months ago at the yearly anime/J-culture convention.  There's one booth that is 90% anime sets but if you walk around to the side of the table they have a stack of movies and weird shit for you to sort through.  This has been on my list to get for a while now as I never had the chance to see it but I knew about it through the early 00's Pittsburgh punk scene.

Wild Zero has a lot going on in it so bare with me.  We start with a bunch of spaceships approaching the earth.  While that's happening a meteor crashes into a town and zombies begin to overrun it, a la Night of the Living Dead.  At the same time, we meet Ace, a Guitar Wolf fan that idolizes their rock n' roll machismo.  When Ace stumbles into a stand-off between Guitar Wolf and a club manager he stands up for rock n' roll only to get knocked out.  After Guitar Wolf shoots the fingers off the manger (while Bass Wolf and Drum Wolf comb their hair) he creates a rock n' roll blood brother pact with Ace and gives him a whistle to call Guitar Wolf if Ace ever needs them.  The next day Ace inadvertently stops a robbery where he meets his new love interest, Tobio.  Zombies attack, the club manager is attempting to track down Guitar Wolf for revenge, and the alien invasion eventually begins... and it's all turned up to 11.  ROCK N' ROLL!

After watching Wild Zero, this film is definitely in my top 10 all-time favorites, maybe even top five but I'd have to spend more time than I want thinking about that right now.  For a movie that came out in 1999, it's surprisingly progressive.  It takes all the things that I personally like about punk and rock, n' roll and rather than pushing the say, Motley Crue model of excess, it pushes this acceptance of everyone in the name of rock n' roll.  It's almost like it's a polytheistic lifestyle, elevated above everyday life.  Are Guitar Wolf gods?  Is this their bible?!  I'd go to church if it were just going in and having the word "rock n' roll" shouted at me from a microphone that shot flames!

This movie is hands down amazing.  There's a drinking game on the disc as well if you're into that.  If you are, then just do so responsibly.  Drunk driving is not rock n' roll!

I give Wild Zero 5 copies of Joan Jett's I Love Rock and Roll out of 5: